A Visual Guide to the 25 Highest-Earning E-Gamers in the U.S. 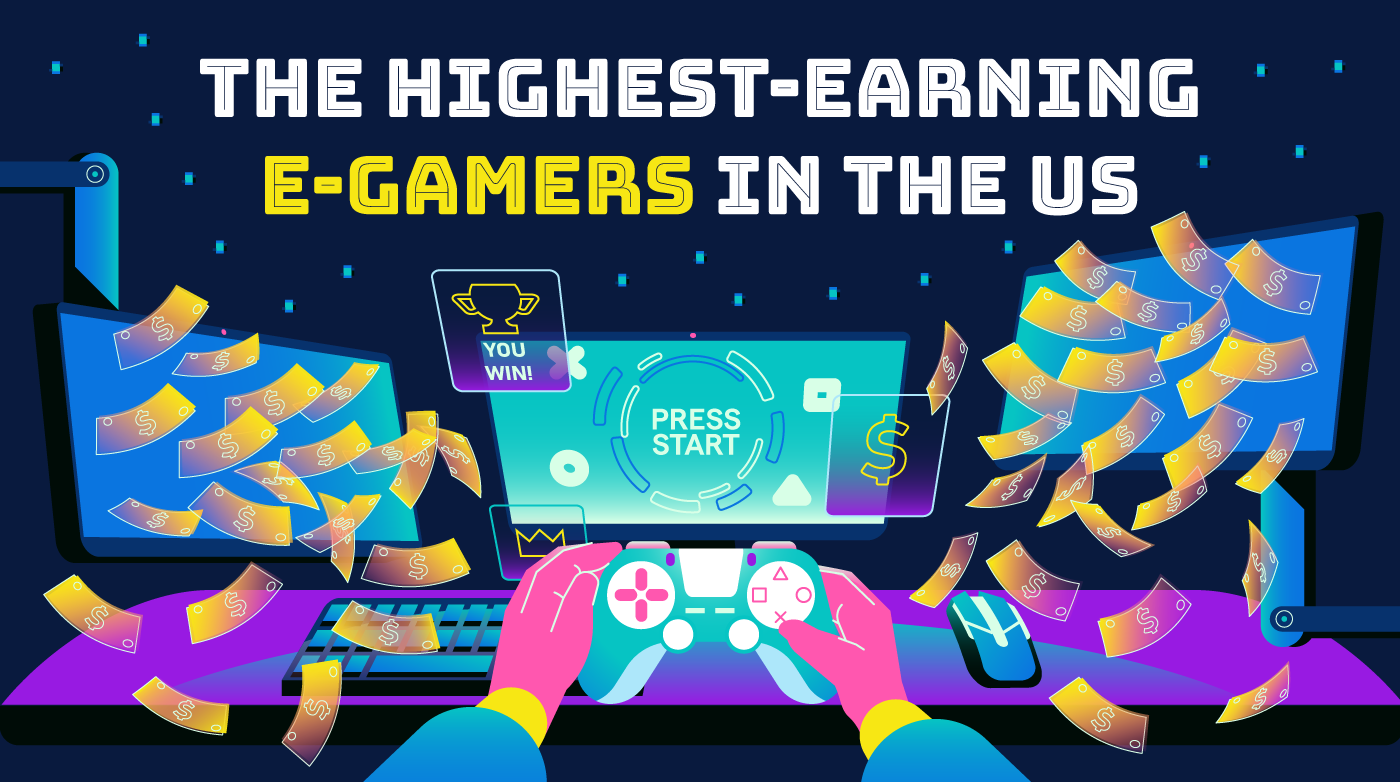 Time for a little trivia. What is the world’s fastest-growing sport? It’s not soccer. And it’s not pickleball (unless we’re only counting retirees). The answer might surprise you – the fastest-growing sport is not even one that was considered a sport by most people until very recently.

If you guessed esports, high-score to you. For anyone scratching their head and picturing a teenager smashing buttons on a greasy PlayStation controller in a dark room, that is so 2000. Today, the global esports market is worth $1.08B and growing, reaching an anticipated $1.62B by 2024. But it’s not just the people playing the games who are generating this value. It’s other people tuning in to watch those gamers do their thing. In the United States alone, viewership is expected to rise 129% to 48 million between 2020 and 2024.

If you’re still confused, a quick definition should help clear things up. Simply put, esports, or electronic sports, is the professional video game playing industry. Just like every other sport that you know and love, esports players compete against one another in organized gaming events or tournaments that culminate in regional and international championships. And much like the fanfare surrounding events like Wimbledon or the Super Bowl, esports brings in millions of spectators from around the world. Then there are all the other components involved in a professional sport, including teams, leagues, sponsorships, and venues.

At Solitaired, we have a similar vision, where users can play tournaments for their favorite classic games, whether it be Hearts, Mahjong, or Yahtzee. We hope to bring people together in a fun and competitive manner with familiar games people know and love, where they can even win prizes.

In that spirit, we thought we’d follow the fame and fortunes to understand who’s rolling in the most. To do this, we looked at Esports Earnings to find the 100 highest-earning e-gamers in the U.S. Note that these earnings are from competition wins only and do not include revenue from sponsorships or other sources.

It pays to play: The top 25 highest-earning e-gamers in the U.S.

If any further proof is needed that esports is a serious game – and a lucrative industry – look no farther than this list. The highest earners are raking in serious dough, with the top three gamers pulling in over $3 million each to-date. 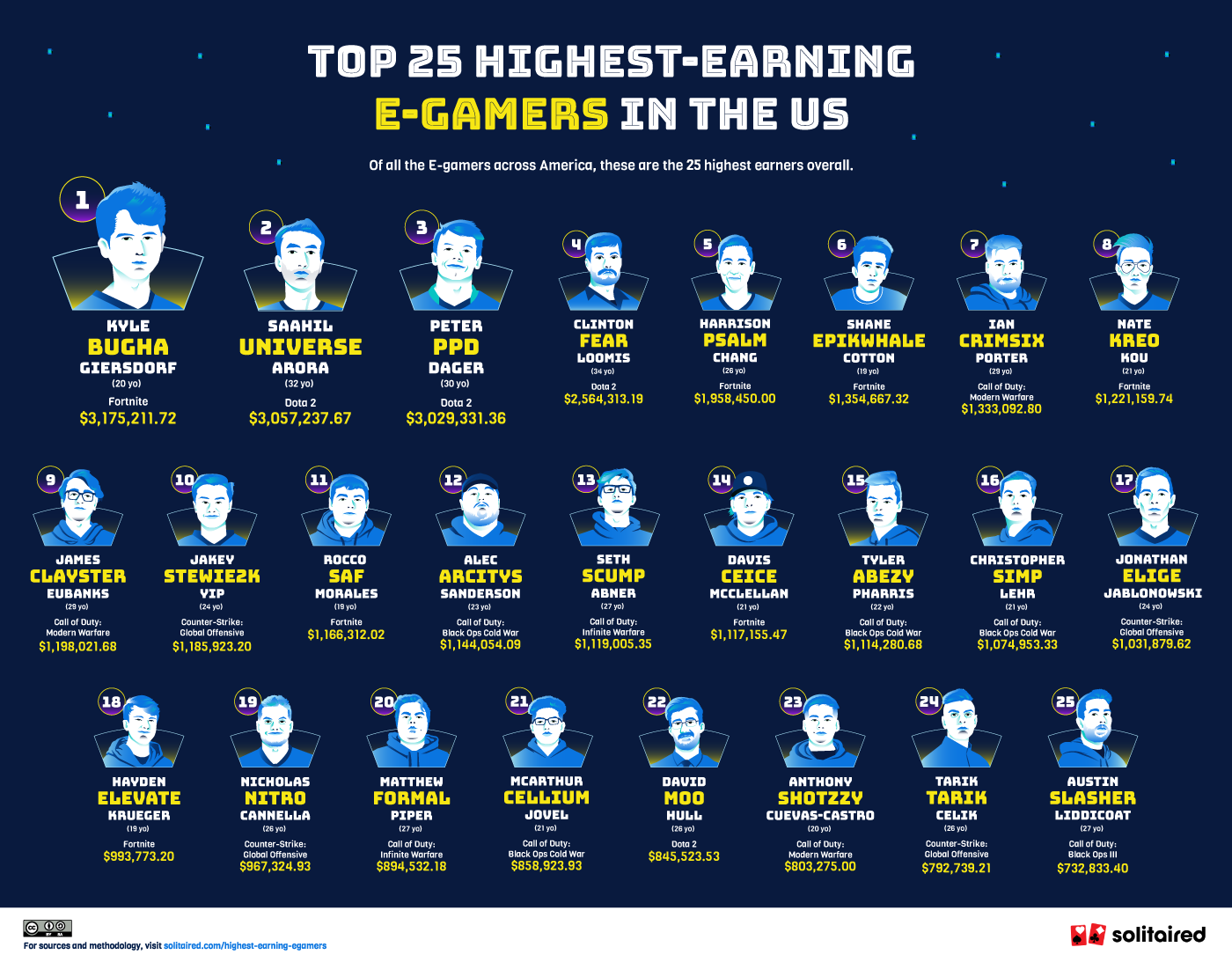 A quick look at the top 25 reveals a few patterns:

With the average competitive career of an esports star lasting just four to five years, 25 is also the age at which most pros “retire.” Many simply move away from competitive gaming into the entertainment or content creation side by live-streaming their gameplay.

The highest-earning player, Pennsylvania native Kyle "Bugha" Giersdorf, was just 16 when he won the 2019 inaugural Fortnite World Cup, beating out 40 million players to take home the $3 million prize. Bugha’s love for video games started early – he grew up playing with his dad, first MarioKart Balloon Battles and later Call of Duty and the pre-battle royale iteration of Fortnite, Save the World. But as with any star athlete, it’s not all fun and games. In the months leading up to the 2019 Fortnite World Cup qualifiers, Bugha put in six hours of practice every night after school.

The second-highest earner has also poured countless hours into perfecting his craft. After a decade of playing Dota 2 (a.k.a. Defense of the Ancients) at the highest levels, Saahil “UNiVeRsE” Arora announced his retirement in 2020 at the tender age of 30. Universe is best known for not only winning the 2015 Dota 2 championships as a member of the Evil Geniuses team, but for making the series-clinching play in a now iconic moment in esports history, the “6 Million Dollar Echo Slam.”

In the third spot, Peter "ppd" Dager has also raked in his profits from playing Dota 2. A resident of Fort Wayne, Indiana, ppd too spent some time playing for Evil Geniuses and was part of the winning team with Universe in 2015. He has held a variety of stints, including Evil Geniuses CEO, a brief retirement and comeback in 2020, and coach for the Sweden-based Alliance. Within the Dota 2 community, he is sometimes called the “Salt King”, purportedly for his outspokenness and quick temper.

Beyond the outsized personalities, what is it that draws fans to esports? Another look at the 25 highest-earners gives us some insights. Across the board, all 25 players have racked up their earnings from just four games: Fortnite, Dota 2, Call of Duty, and Counter-Strike. These are all classified as first-person shooter (FPS) games, with the exception of Dota 2, which is considered a multiplayer online battle arena (MOBA) game.

FPS games remain a popular genre among players and spectators alike due to their simple but realistic, adrenaline-inducing design. While MOBAs are far more complex and strategy-focused in comparison, they are gaining in both viewership and prize money. The reason the Dota 2 championships have such a generous prize pool – the largest of any esport – is largely thanks to crowdfunded sales from in-game purchases that the game’s developer, Valve, releases three months before the tournament.

Fighting femmes: Women at the top of their egame

So far we’ve heard about the top men in esports. But where is the women’s contingent, you might ask? Downloading the top ten highest-earning ladies now… 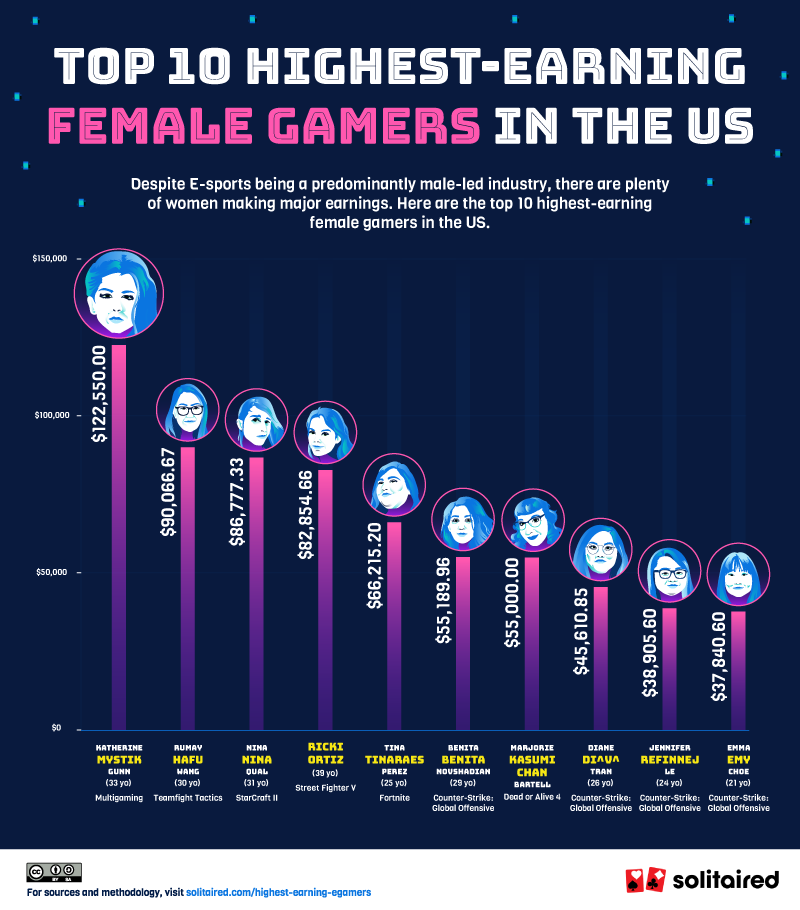 The first thing you’ll likely notice is the disparity between the earnings of the top male esports players and the top women players. The number one highest-earning female gamer in the U.S., Katherine "Mystik" Gunn, is the only woman to make six-figures. But that $122,550 in total earnings doesn’t even put her close to the number 25 spot on the men’s list, which belongs to Austin "Slasher" Liddicoat at $732,833.

Where the women lack in prize money they make up for in versatility. While four of the top ten owe their earnings to the game Counter-Strike, the other six bring in cash from games that run the gamut of genres, from FPS games like Fortnite and Counter-Strike to the real-time strategy game of StarCraft II and the auto battler Teamfight Tactics. The fighter game genre, which is not even represented among the highest-earning men, is lucrative for the ladies. The number four spot belongs to Ricki Ortiz for Street Fighter V, while Marjorie "Kasumi Chan" Bartell comes in at number seven for the fighting game Dead or Alive 4.

Top-earner Mystic has the sole designation of taking her earnings from “multigaming,” including from Call of Duty: Warzone and Dead or Alive 4 tournaments. The bulk of her cash, though, came from winning season two of the reality show WCG Ultimate Gamer, where contestants competed against each other across a variety of video games. No one-trick ponies here.

The future of esports

Women aren’t just playing games, they’re also tuning in to watch. In early 2020, women accounted for just 23% of U.S. esports viewers, but by the end of year, that figure had shot up to 36%. Among the general U.S. population, viewership during 2020 rose from 12% to 19%. With such rapid growth in interest from people both playing and watching, it’s an exciting time for the esports industry.

While tournaments will continue to draw huge audiences to watch professionals compete, more and more people will get their everyday fix from watching gamers play on platforms like Twitch. For many top players, live-streaming allows them to connect with their fans and turn what can be a grueling professional gaming career into a more sustainable vocation. With such a short professional shelf-life, having such a prospect is good news for any soon-to-retire 20-something.

As esports continue to grow in popularity, it will even become mainstream in areas like education. Already, esports-related subjects are making it into curriculums at schools around the world - 170 colleges and universities are currently offering programs and over $16 million in scholarships. With research that links video games to helping students develop skills needed for STEM and technical education, as well as soft skills like teamwork and leadership, schools are helping young gamers hone their passion into viable, long-term careers.

Considering esports are being treated more like every other professional sport, it’s possible that someday very soon, a trivia night out at your local sports bar might very well include questions about esports’ biggest stars.