How to Play Cruel Solitaire

Cruel Solitaire is similar to Lucky Thirteen, but has 12 tableau piles, allows unlimited reshuffles, and you begin the game with aces already in the foundation piles. 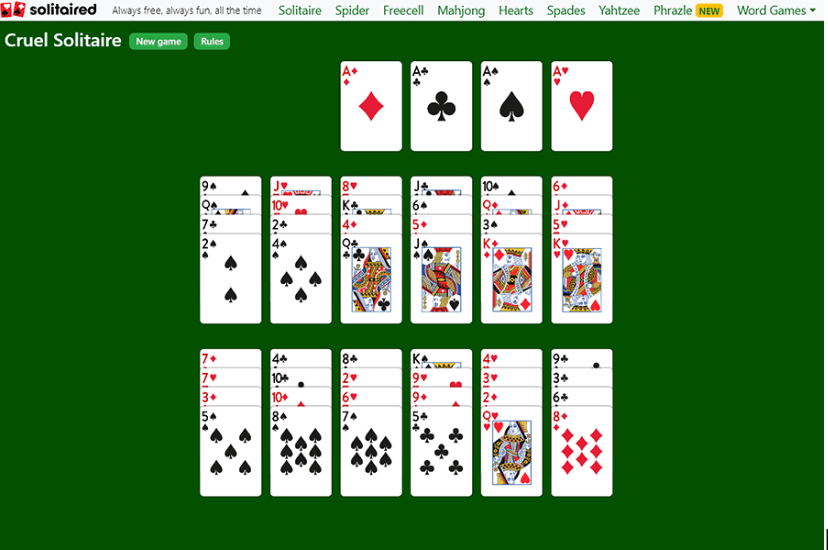 How to Play Cruel Solitaire

Cruel Solitaire is a little different from other variations but most similar to lucky thirteen. That said, the gameplay remains familiar: build up the foundations in ascending suit order to win.

Unlike spider solitaire, which includes a stock pile, cruel solitaire contains no stock or waste pile, but does have a redeal feature.

This is a big part of the game — you can redeal the tableau cards at any time. However, the order of the cards remains the same. Instead, it re-organizes the cards back into piles of four — overall, there will be fairly minimal charges to the tableau.

If you can’t make any moves after a redeal, then redealing again will not change anything. At this point, the game is over.

Cruel Solitaire is, well, cruel. It’s a medium-difficulty game (not as hard as forty thieves) and has slightly different rules. It’s a great addition to any solitaire collection, but it may take a while to get the hang of it. 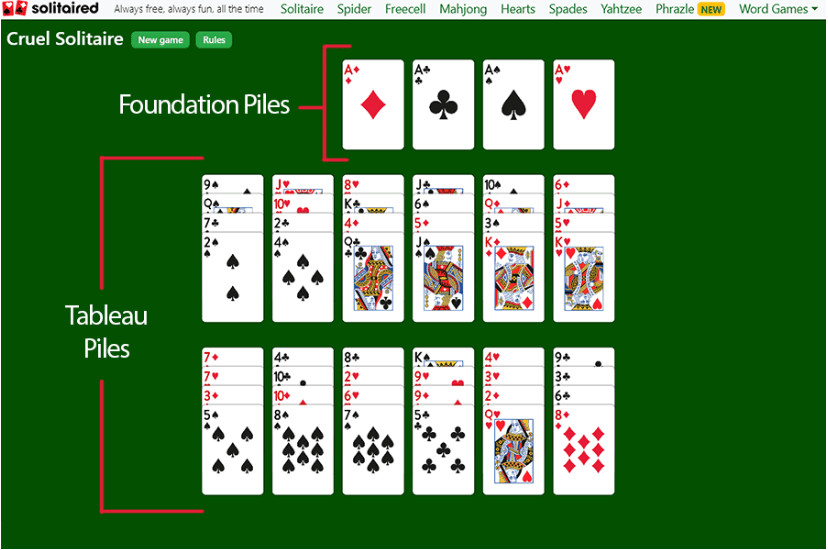 Foundation piles: These are usually the empty piles at the beginning of the game. You’ll build them up as you go. For cruel solitaire, the aces are already laid out for you.

Tableau piles: These are the workable piles on the table. They are shuffled and dealt before the card game starts.

The setup of cruel solitaire is a little different from other variations. For starters, you place the aces onto the 4 foundation piles before beginning.

Shuffle the remaining cards and deal 12 tableau piles of 4 cards. All cards will be face up.

There are no stock or waste piles, so you won’t get any new cards. But there is an option to redeal; you’ll need this to reorganize the tableau piles to free up cards — but more on this shortly.

The aim of the game is to build the foundations from ace to king in ascending suit order. For example, one foundation pile may begin with the ace of diamonds and will finish with the king of diamonds.

Once you complete all foundation piles, you win the game. Sounds simple, right?.

You have unlimited redeals available. The order of the cards remains the same, but the cards are placed back into piles of four. This helps create more moves by freeing up more cards. 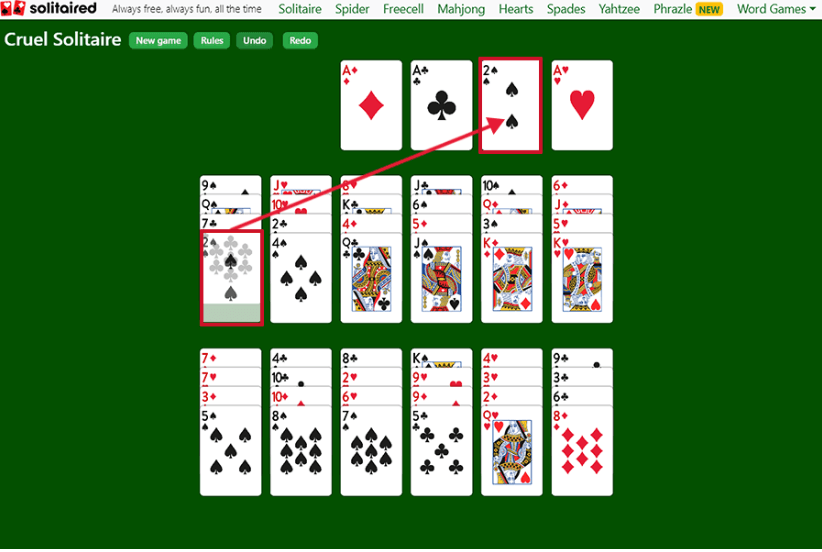 Cruel solitaire can be a little difficult to follow if playing for the first time, especially if you’re using real playing cards.

But learning the rules and understanding how to re-shuffle the cards will make your playing experience more enjoyable.

So, the rules are as follows: 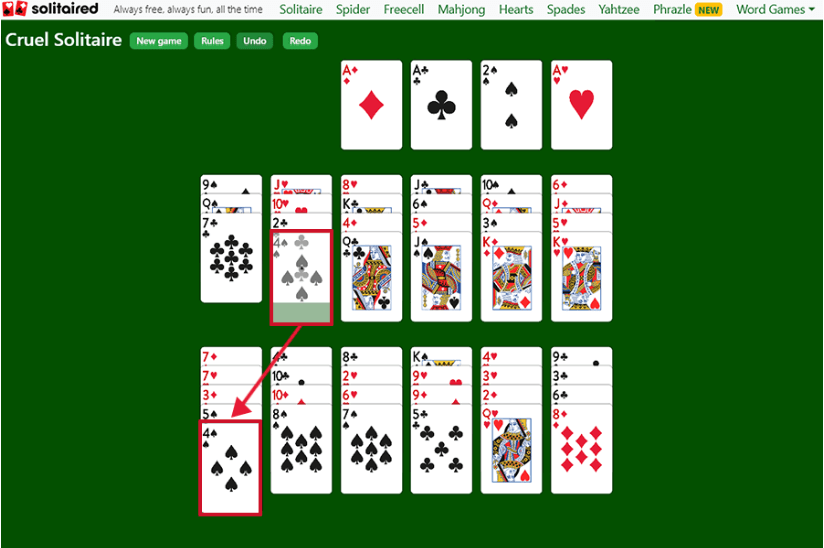 What is a good strategy for Cruel Solitaire?

Following a good strategy is key to winning cruel solitaire. There are multiple tips you can implement into your game to make it more enjoyable and increase your odds of winning. We’d recommend the following:

Be careful of your builds in the first tableau pile (top left).

It’s a good idea to be careful of your builds in the first tableau pile. For instance, don’t build down a suit with a lower rank card underneath.

Doing this may cause the card to become stuck, preventing you from building the foundations and ultimately, causing you to lose the game.

Watch out for kings.

The same principle applies to kings. More specifically, if you notice a king card in the first tableau pile (top left) and it’s on top of any other card of the same suit, then the game is probably unwinnable.

If this happens, it’s usually best to start a new game (as frustrating as this is).

Analyze the next re-deal to open up more moves

The redeal option maintains the same order of cards but places them back into piles of four.

Once you get used to how this moves cards aroundt, you’ll be able to predict how the cards will be re-dealt.

Understanding this allows you to know whether a redeal is the right move or not, i.e. if it will open up more moves or make things more difficult.

Don’t always move a card to the foundation piles

You don’t always need to move a card to the foundation piles just because it can be moved.

Instead, it’s sometimes best to hold onto a card to prevent blocking other moves. Remember: it’s best to build the foundations evenly, so you don’t want to sacrifice progress in the foundations for one card.

You’ll develop this skill (knowing when to play a card) the more you play cruel solitaire and other variations such as the more popular, and classic klondike solitaire.

What are the odds of winning Cruel Solitaire?

The odds of winning cruel solitaire are somewhere between 10 and 20%. But more skilled players who adopt a good strategy can win up to 40% of the time.

Is winning solitaire based on skill or luck?

Winning a solitaire card game requires both skill and luck. Some games are impossible to win, but the games you can win require skill and a good strategy.

What’s the difference between solitaire and patience?

Solitaire and patience were both formed around the same time. Once slightly different, both games are virtually interchangeable these days.

How does solitaire affect the brain?

Solitaire is a highly analytical game with several cognitive benefits. It helps calm the mind, improves logical thinking, and may even help you relax.

Why not try Classic Solitaire ,Word Hurdle, Sudoku, a or crossword? If you’re looking for other variations of solitaire, we’d recommend checking out Yukon or Freecell.