Remember playing Oregon Trail when you faced almost certain death at the hands of anything from a river to dysentery? Or maybe you tried your shot at Frogger and dodged as much as you could on that busy street to get safely to the other side. Or did you battle it out with friends using bananas and shells in Super Mario Kart?

While new is nice, many Americans would prefer to bring back the past… at least when it comes to classic computer games and video games (from the late 80s, 90s, and early 2000s). A new survey of more than 1,000 Americans finds many would be willing to spend money to be able to play their favorite childhood games again.

If people could rewind the clock, the first computer game they’d click on would be card game like Hearts or Minesweeper. Nearly 60% have played the classic PC computer game, and a lot of them still do. Nearly 1 out of 3 (32%) admit to still actively playing it!

As for those who no longer have the game or a computer they can play on, they miss those games a lot. More than 4 out of 5 (85%) said they would still play these games if they could.

Nintendo reigns supreme when it comes to favorite classic video games. Out of the top 10 most played games, five feature the infamous plumber! Just like computer games, 39% of people still actively play these classic Mario games.

The top five classic video games people have played the most include Super Mario Kart, Super Mario Bros., The Legend of Zelda, Super Mario Bros. 3, and Super Mario World. Americans spend about 4 hours every week playing these original games. Nearly 4 out of 5 (87%) said they would play it if they still had the game or console. 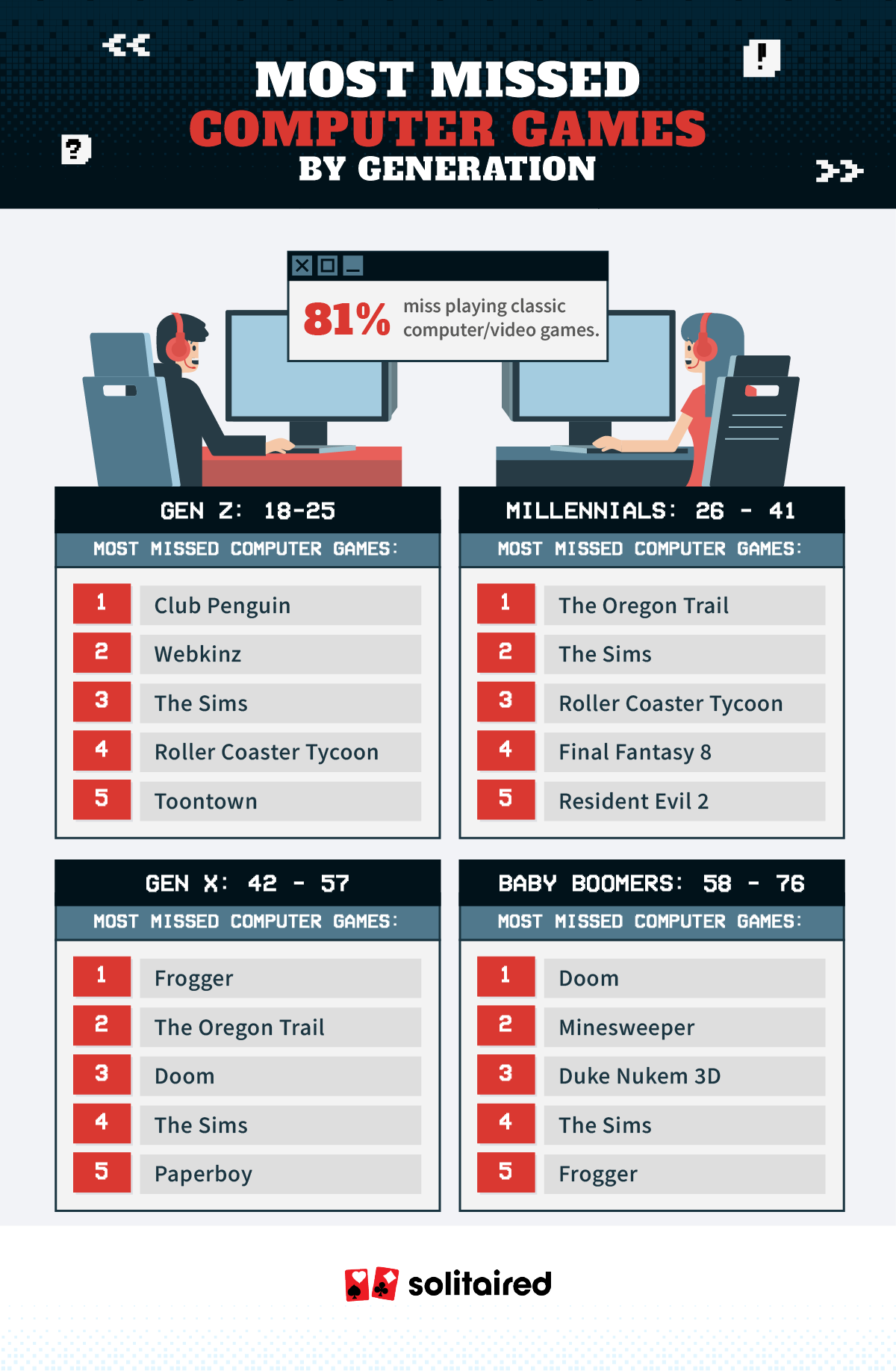 When it comes to classic computer games, every generation chose a different one as their favorite! The top game for Gen Z (ages 18-25) was Club Penguin, Millennials (26-41) miss The Oregon Trail, Gen X (42-57) could go for another game of Frogger, and Baby Boomers (58-76) wish they could play Doom again.

However, there was some crossover across generations. The Sims is a top game for every generation. Gen Z, Millennials, and Gen X are big fans of The Oregon Trail. Gen X and Baby Boomers also both share a love of Frogger and Doom.

These games really made an impact, because 81% of people surveyed said they miss playing classic computer and video games. 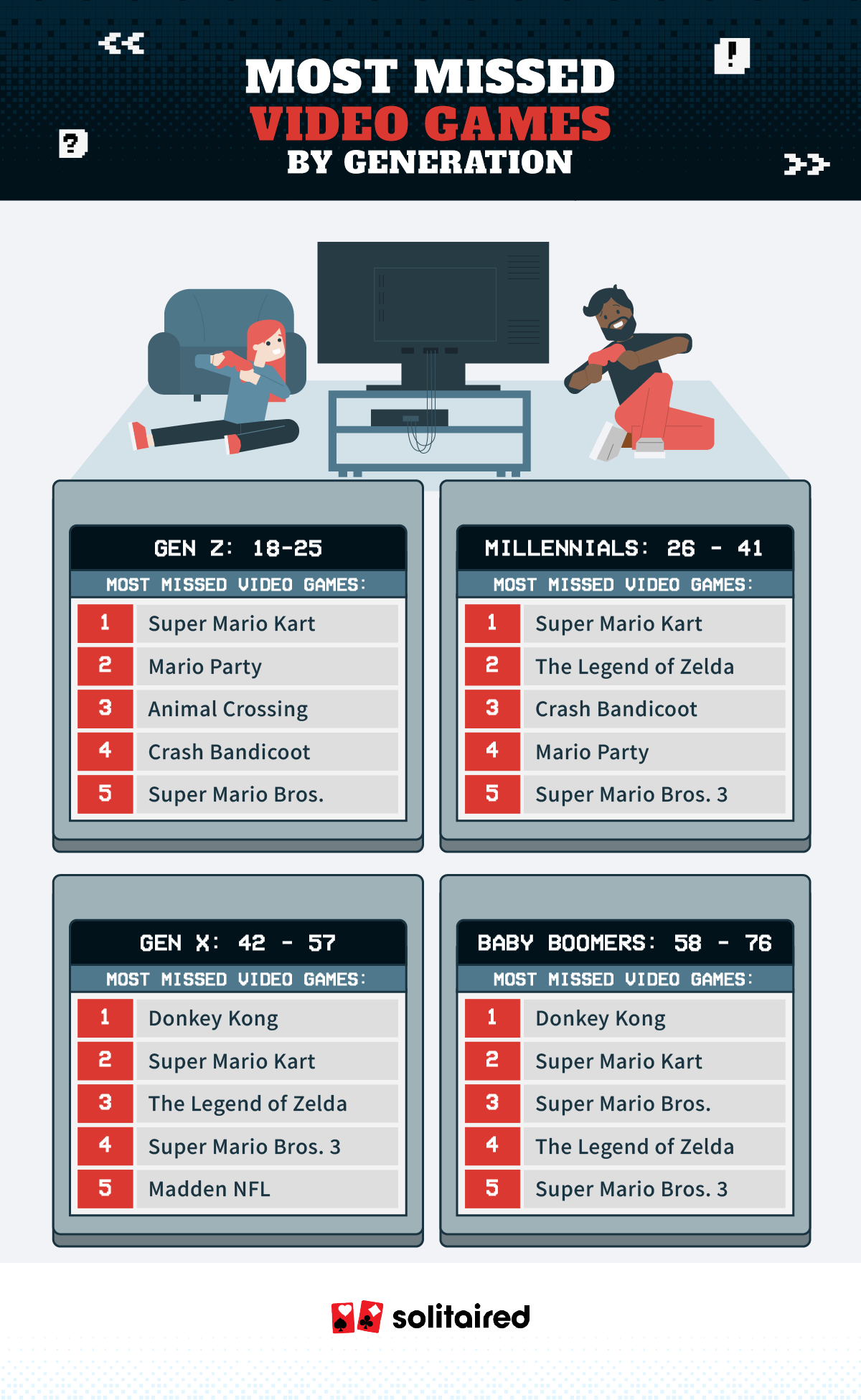 There are two clear winners when it comes to each generation's favorite classic video game: Super Mario Kart and Donkey Kong. Gen Z and Millennials love Super Mario Kart the most, and Gen X and Baby Boomers are fans of DK.

Gen X was the only generation to choose a sports game. Their fifth most missed video game was Madden NFL.

About 2 out of 5 had an Xbox, Game Boy, and Nintendo Gamecube. Less than 1 out of 10 got their hands on the Sega Game Gear, Atari Jaguar, and The Odyssey.

Right now, more than half (54%) still have one of these classic gaming consoles in their homes. The top ones that people have held onto are the Nintendo 64, Game Boy Advance, Nintendo GameCube, Sony Playstation 2, and Xbox. Of those who own them, 66% still use those consoles to play games.

There’s nothing like the sound of music from your favorite old video or computer game, as it takes you right back to growing up. More than 3 out of 5 (61%) said the reason they play these classic games is that it reminds them of their childhood or past. Others just enjoy the gameplay (58%) or say it reminds them of a happier time (36%).

People were split nearly down the middle on whether they’d like to play a classic computer or video game (52%) versus a new game (48%). More than half (51%) believe the classic games from the 80s, 90s, and early 2000s are better than current games. Either way, more than 1 out of 5 (21%) have actually bought a classic console just to play an old game again. Another 30% play classic games through an emulator.

It’s no surprise people would be willing to spend so much to bring these nostalgic games back. The games often have the ability to take people back to simpler, more carefree times. With so much going on in the world, sometimes it helps to just take a moment and play a game.

When using this data and research, please attribute by linking to this study and citing solitaired.com