The player can roll up to three times per play. Not all dice need to be rolled on each successive roll. Dice can be locked by being clicked on. Only the dice that are active will be rolled again.

After each roll, the tentative scores are visible on the board.

Scores in the upper box are based on the die number of the box multiplied by the number of times it appears in the roll. For example, if a roll consists of 1, 2, 3, 3, 4, the score for the Threes box will be 6, because you landed two 3s, which would total 6. 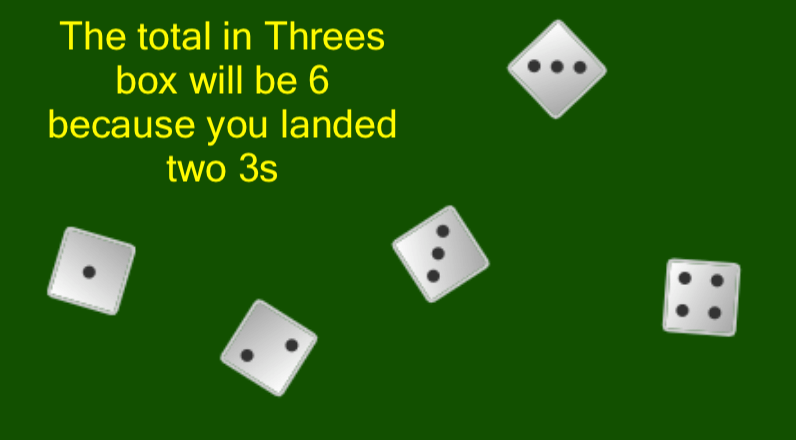 If the sum of all the upper boxes is 63 or greater, the player receives an additional bonus of 35. To get at or above 63, aim for 3 of a kind for each of the upper boxes.

Scores in the three or four of a kind box are the sum total of all the dice that have been rolled, assuming that there are three or four of the same dice in the roll. The example below is a 3 of a kind, which will total 15 points. 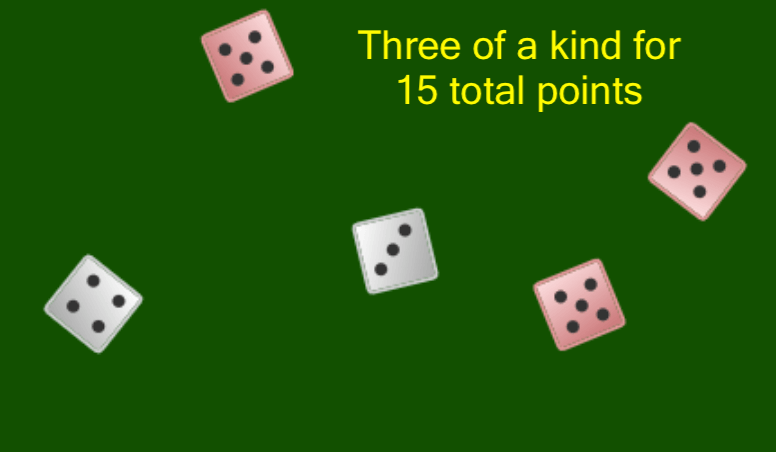 A full house consists of a pair and a three of a kind, and receives 25 points.

A large straight is a sequence of 5 dice, and is scored as 40 points.

Chance is the sum total of all the dice, and can be used when no other play seems good.

If a subsequent Yahtzee is received, then the player can go for a 'Double Yahtzee,' which is an additional 100 points. The player must then choose an additional score before continuing (details below).

If the roll generates no score for a given box, a zero will be displayed. Zeroes can be selected as a score.

At any time during your play, you can select the desired score from the board. That finishes your turn.

After 13 rounds are up, the game is over. The scores are tallied up and the winner is the player with the highest score. Good luck!

If you roll a subsequent Yahtzee, you have the chance to receive a Double Yahtzee, which adds a hundred points to your score.

If you choose the Double Yahtzee, you'll also need to choose another score on the table. This ensures each player has the same number of available scoring boxes.

The scores you can choose from are based on the scores that are currently on the board. If the upper box for that number is available, you must choose that box (our system will choose it for you).

If that number is not available, you must choose a lower box score.

If no scores are available there, we let you choose a score from the upper box.

If no scores are available at all, then you must be already at the end of your turn and we move on to the next player.

Learn more with our guide on how to play Yahtzee.

Aim for the upper boxes first; try to get three of a kind for each number, especially the highest numbers (5 & 6).

Try only going for Chance if it's either 25 points or above, or if you have no other good plays.

How many dice are in Yahtzee?

How many rolls are in Yahtzee?

Yahtzee is a dice game that involves a lot of luck, but you can also make strategic choices. You begin your turn by rolling a five dice. Next, you may choose to re-roll any number of those dice, but not more than three times.

What does Yahtzee mean?

Yahtzee is a fun dice game. You throw a five dice in a turn and try to roll certain combinations of numbers. With different combinations, you win different scores.

What is a full house in Yahtzee?

When was Yahtzee invented?

"The Yacht Game" was invented by a Canadian couple in 1954 who started out by playing with their friends while sailing on their yacht. Their friends got really attached to the game and that's when the couple approached Edwin S. Lowe to see if he could produce sets that they could give to their friends as gifts. Lowe saw potential in the game and acquired the rights and renamed it "Yahtzee."

What is a small straight in Yahtzee?

How to roll a Yahtzee every time?

In order to get a Yahtzee every time, try to get 63 points in the upper section early in the game. To maximize your score, it's important that you balance the scores between upper and lower sections. To get a Yahtzee, leave your chance roll until late in the game when there are fewer options.

When was Yahtzee first played on a computer?

Yahtzee first came out on the computer in 1978 on the Apple II. While the computer supported color graphics, Apple's version of the game was black and white and text based. Either way, its introduction to computers marked a major step forward for the game.

Play against other players currently online or play against the computer.