How to Play FreeCell

FreeCell is a single-player patience card game that is a variation of the traditional solitaire format.

Like all solitaire games, the aim is to stack cards based on value and color to expose cards deeper in a stack and move them to four ‘foundation’ piles. Once all four foundation piles are complete, the game is won.

The name ‘Freecell’ refers to the four ‘free cells’ available to use as temporary storage for tableau cards – this differentiates the game from other variations of solitaire, like Klondike and Spider.

The game is played with a traditional deck of 52 playing cards.

How to play Freecell

Freecell follows a basic solitaire format, with players aiming to create four winning foundation piles – one for each card suit. As with all solitaire games, cards can be stacked in the tableau based on color and value. For example, a red four stacks on a black five, which stacks on a red six. And so on.

Players can also make use of four ‘free cells’ above the tableau – where cards can be stored to free up more useful cards stacked below.

Differences between Freecell and Klondike Solitaire

There are a few main differences between Freecell and traditional Klondike Solitaire. Firstly, there are no face-down cards in Freecell – all cards begin exposed, so players can tell where each card is in the tableau from the start of the game.

As the game’s name suggests, the second key difference is the ‘free cells’. In Freecell, players are allowed to use four free cells above the tableau to move and temporarily store cards to expose deeper cards in the stack. Cards moved to a free cell can be moved back down to the tableau at any time – either to an empty column or stacked on a card of the opposite color with a value of one higher.

Arguably the biggest difference between Freecell and Klondike Solitaire, however, is in the number of stacked cards a player is allowed to move at once.

In Solitaire, players can move an unlimited number of cards at once, granted they are stacked chronologically and by color. In Freecell, the number of cards a player can move at once is limited and based on how many free cells are currently vacant above the tableau.

Players can move one card at a time between columns unless they have free cells available. Then, the rules are as follows:

The maximum number of cards a player can move in one stack is five.

How to set up a game of Freecell

Freecell can be played using either a traditional deck of cards or online. To set up a game of Freecell with a deck of cards, follow these steps: 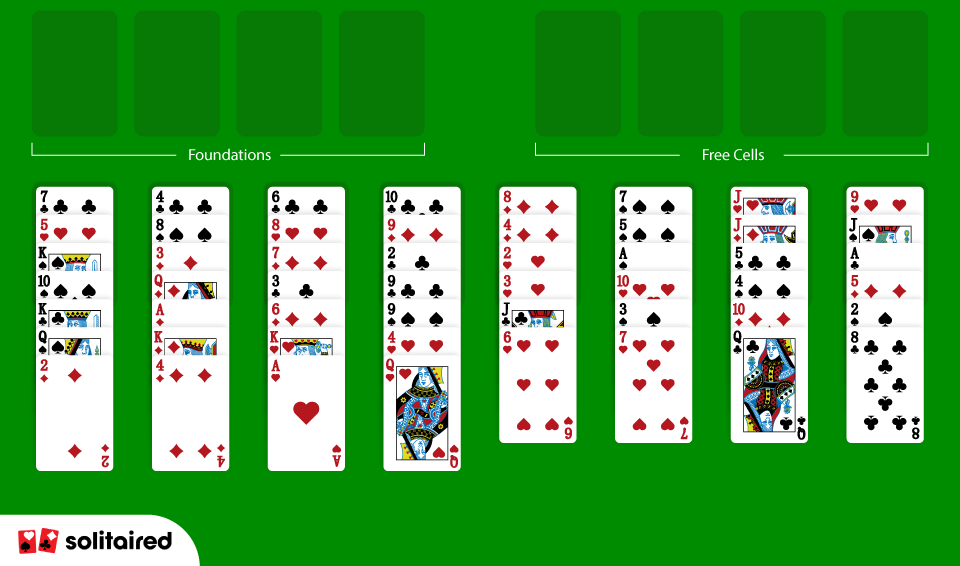 Online FreeCell requires no set-up, and you can play unlimited games against AI on Solitaired.com.

Certain rules in Freecell differentiate the game from other variations of solitaire. Understanding the game’s unique rules gives players the greatest chance of winning.

Rules of Freecell include:

How to win at Freecell

Understanding useful Freecell strategies is key to winning games. Below is a list of top tips for a successful game of Freecell:

There are many alternative games to Freecell that follow similar solitaire or patience formats. Games like Freecell include:

At Solitaired, we have over 500 free games to play, including word games, solitaire and multiplayer card games.

Why can’t I move stacks in Freecell?

The number of stacked cards a player can move at one time depends on the number of ‘free cells’ available in the game.

Is there a strategy to Freecell?

While there’s no single strategy that guarantees a win in Freecell, there are some tips for increasing a player’s chances of winning. These include planning several moves ahead, moving aces to the foundation piles early in the game, and creating empty tableau columns.

Check out the tips in our guide to improve your Freecell gameplay and increase your chances of winning.

Which are the free cells in Freecell?

The name ‘Freecell’ refers to the four ‘free cells’ players can use to temporarily hold cards during the game. This differentiates the game from traditional Klondike Solitaire, in which there are no ‘free cells’ available.

Are all Freecell games winnable?

While almost every game of Freecell is winnable, occasionally a player will draw a hand that is not winnable – however, this is extremely rare. It’s estimated that over 99.9% of Freecell games are winnable.

Using a basic and common deal numbering system – used on both Solitaired.com and Microsoft Freecell – game number 11,982 is the first unwinnable game and the only unwinnable game in 32,000 draws.

How is a game of Freecell scored?

Online Freecell has a unique scoring system based on the time taken to win the game and the total number of moves made by the player during the game. Points are typically awarded for every card moved to the foundation pile, with bonus points awarded for completing a game. Points are deducted for each move made and for use of the undo function.

At Solitaired.com, you can create an account to track your personal scores and compare them with other players.

Below is a list of the key terms used in Freecell that you may come across in this guide or while playing the game. We’ve even included a definition of each term to help you better understand the game and improve your gameplay: