How to play Mahjong Solitaire

What is Mahjong Solitaire?

The game is believed to have been created in the 1980s and takes its name from the classic Chinese game ‘Mahjong’, from which it also borrows its tiles. However, the two games are very different, with the original ‘Mahjong’ being a multiplayer strategy game.

Mahjong Solitaire follows a traditional pairing format, in which two identical tiles are paired together and removed from the playing area. The aim of the game is to pair all the tiles until the playing area is empty.

How to set up a game of Mahjong Solitaire

One of the exciting elements of Mahjong Solitaire is that the game layout can be customized by players to keep it fresh and make each game more or less difficult.

Players can set up their own starting layout using the standard 144 Mahjong Solitaire tiles, which are shown below: 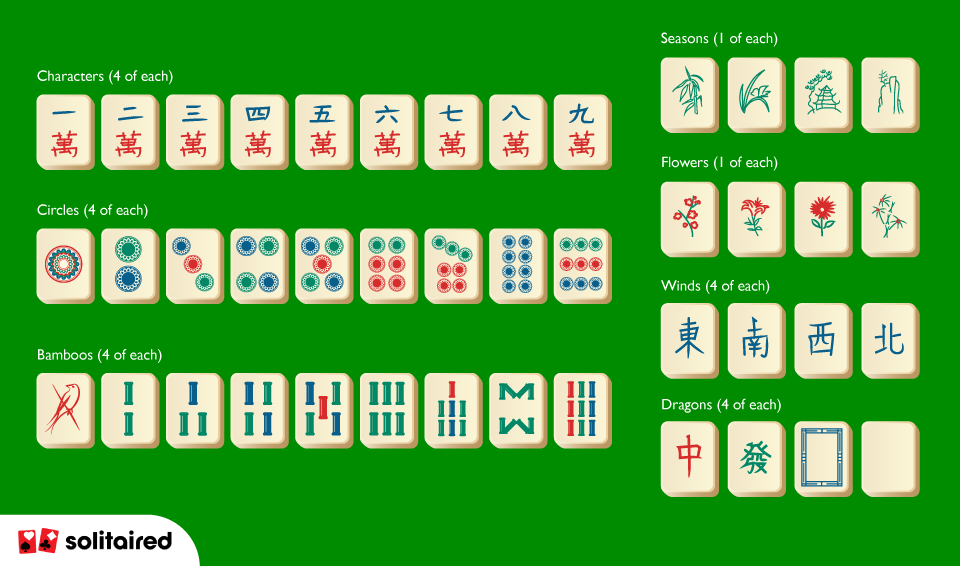 The only requirements for a Mahjong Solitaire layout are that the tiles are laid randomly, and the shape features four total layers of tiles in a pyramid design – meaning each progressive layer has fewer tiles than the layer below. The exact shape of the layout can be decided by the player.

There are multiple ways to set up a game of Mahjong Solitaire and customization is common for more experienced players. However, the most common Mahjong layouts include the traditional ‘spider’ layout, as well as ‘pyramid’ and ‘square’ layouts.

Your final Mahjong Solitaire layout will likely look like one of the following: 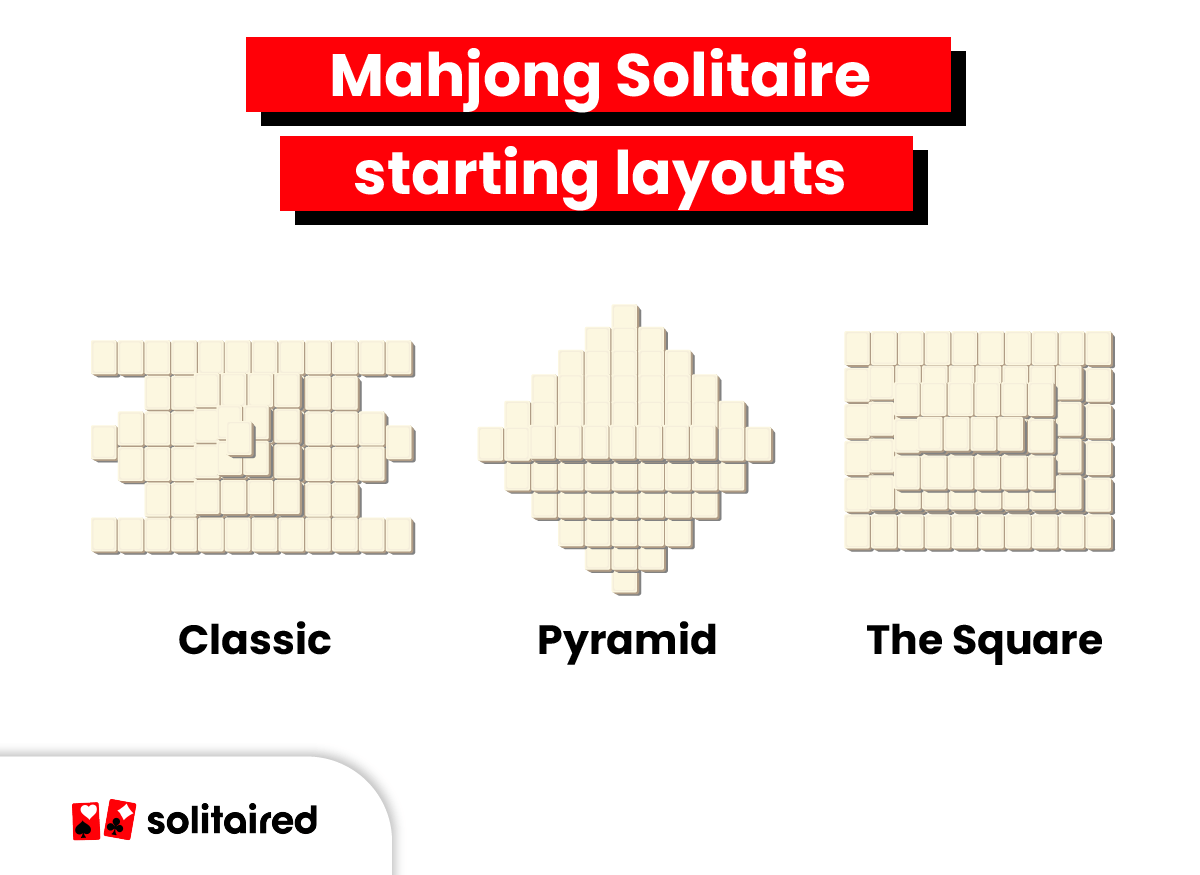 How to play Mahjong Solitaire

The aim of Mahjong Solitaire is to clear the playing area by removing paired tiles. However, there are certain rules about which tiles can be paired.

Firstly, tiles must be identical to form a pair – this means they must feature the same suit and number. For example, the two of winds can only be paired with another two of winds tile. The exceptions to this rule are the ‘seasons’ and ‘flowers’ tiles, which can all be paired freely. 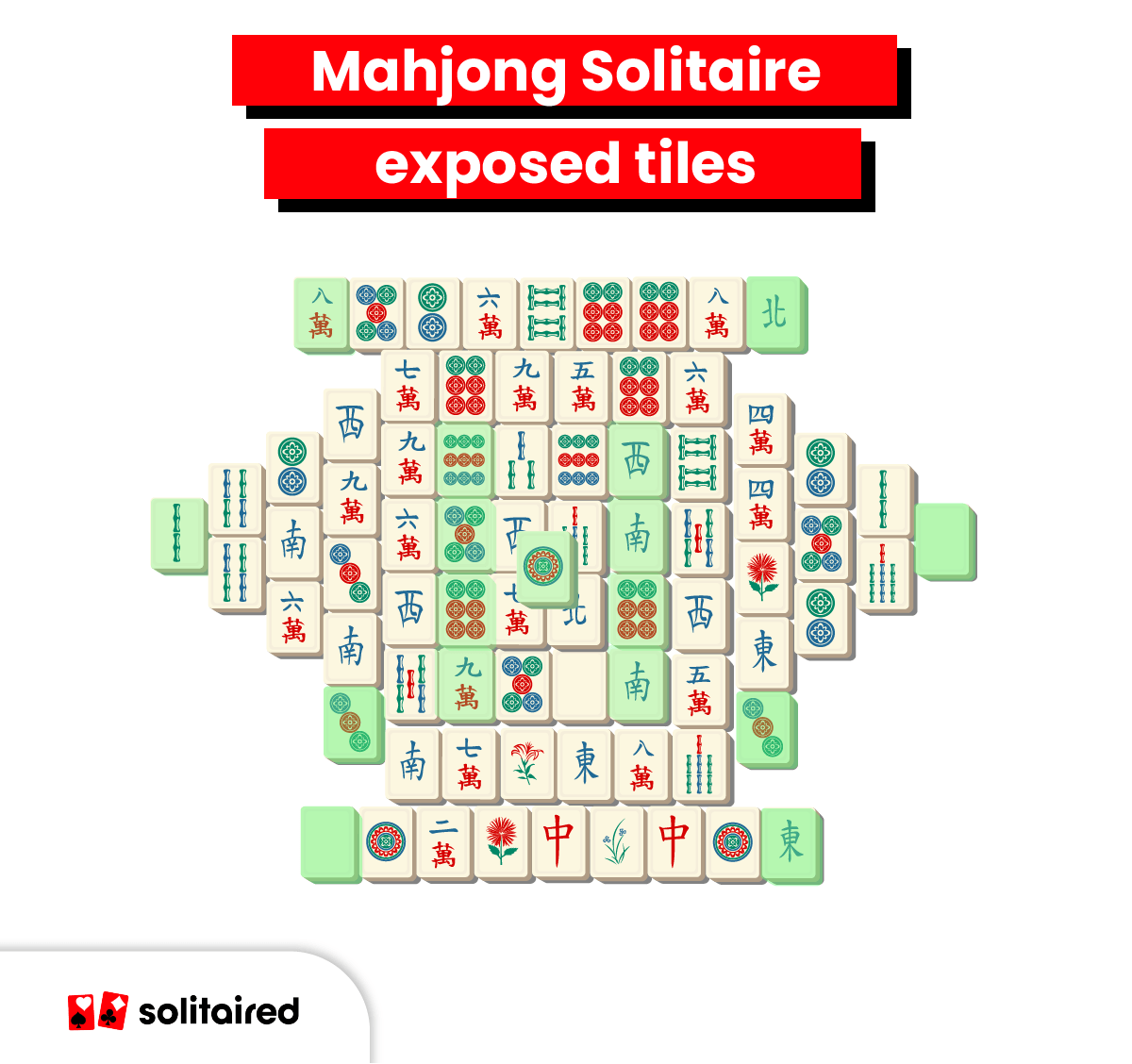 Players continue to pair exposed tiles until they clear the playing area – in which case the game is won – or they run out of legal moves. If a player runs out of moves before the playing area is cleared, they are allowed to ‘shuffle’ the tiles.

When tiles are shuffled, the current playing layout is taken apart, the tiles are mixed up, and a new playing area is created. This does not have to be the same shape as before. However, players should typically keep the same number of ‘levels’ as in their pre-shuffle layout, even if the new shape is different.

Players then continue pairing identical tiles in the new layout until they clear the playing area.

While Mahjong Solitaire is simple in its pairing format, certain rules make the game unique and challenging:

How to win at Mahjong Solitaire

A game of Mahjong Solitaire is won when the playing area is cleared by matching and removing all 144 tiles.

However, the key to the game is not to simply match all obvious pairs immediately – it is based on strategy, and it can sometimes be beneficial to save pairs.

Below are some top tips on how to win at Mahjong Solitaire:

While there is no way to guarantee a win in every game, one way to improve your skill is to practice. Play Mahjong Solitaire free now on Solitaired.com.

Scoring a game of Mahjong Solitaire

While a ‘win’ in Mahjong Solitaire is based on whether the playing area is cleared, many versions of the game also score players. In these versions, players can compete to beat their own previous records or play against others.

At Solitaired, we provide over 500 games – including a range of solitaire variations – free to play.

Is there a strategy to Mahjong Solitaire?

Despite Mahjong Solitaire’s seemingly simple pairing format, there is a strategy to winning the game. Players can only pair ‘exposed’ tiles, so it pays to plan ahead to make sure each move frees up further pairs. Simply pairing all obvious pairs straight away can lead to players quickly running out of moves.

For more tips on how to win at Mahjong Solitaire, read our detailed guide.

What is the difference between Mahjong and Mahjong Solitaire?

While Mahjong and Mahjong Solitaire use the same set of tiles, the two games are very different.

Mahjong is a multi-player game in which competitors aim to collect a winning hand of tiles – similar to the card game Rummy. Mahjong Solitaire is a solo pairing game in which players attempt to clear a playing area in a classic solitaire format.

Is Mahjong Solitaire good for your brain?

Yes, playing Mahjong Solitaire is good for the brain. This is because the strategy game tests multiple cognitive skills including memory, concentration, and pattern recognition. It can also be beneficial in helping players to relax and unwind by occupying the mind.

View our full range of over 500 free online games – including Yahtzee – all of which are completely free to play, now.