How to play Checkers

Checkers – also known as draughts – is a strategy, piece-taking board game. The board is set up with uniform black and white checkers (some sets include red checkers) that can only move diagonally and the game is played by two players on a traditional 8x8 Chess board.

Historians believe that Checkers originated around 3000 B.C.E., with a similar board game called "Ur" found to be played in Iraq at the time. However, some believe it dates back to 1,400 B.C.E. from a game called "Alquergue" that was very popular in that era. Checkers is played worldwide and is still one of the most popular strategy board games today.

The objective of Checkers is to capture all your rival's pieces on the board by jumping over them diagonally to the next available square. Unlike Chess – where every piece is unique and has its own rules as to where they can move – all pieces in Checkers are the same in that they can only move forward and diagonally, except for kings.

How to Play Checkers

Checkers is a deceptively tricky game. It's easy to think that anyone can pick up the rules and win instantly. In reality, Checkers requires a lot of strategy and forethought to come out on top.

To get started, we've outlined the basic rules of Checkers for those seeking additional help or looking to step up their game.

Typically, the player with black checkers makes the first move. Going forward, each player alternately moves one checker at a time. See the layout of the board below: 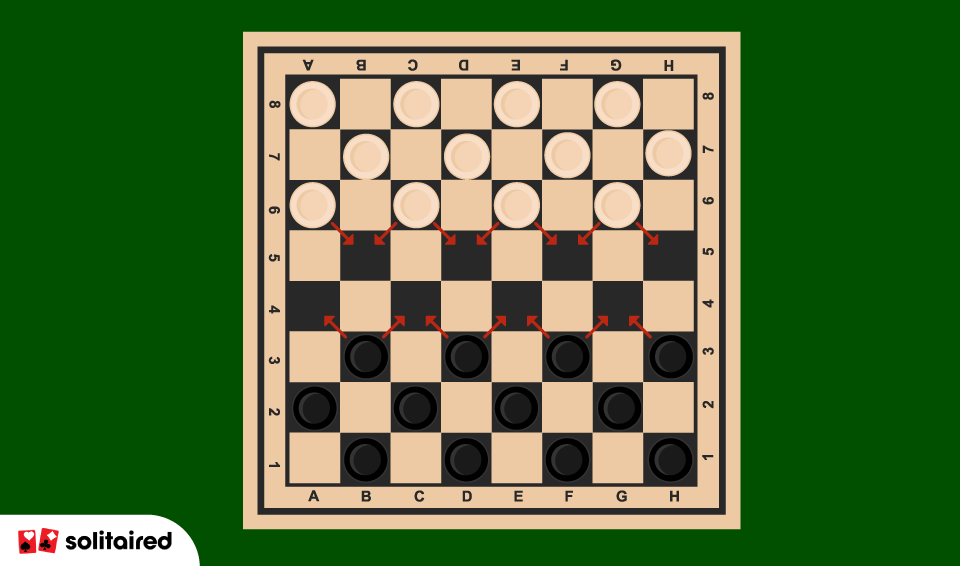 Before long, weaknesses in the formation begin to show, and players can start capturing stray checkers across the field of play. You must capture checkers on a turn if the option is there to do so – you're not allowed to make other strategic moves in sections of the board if you can take an opponent's checker. 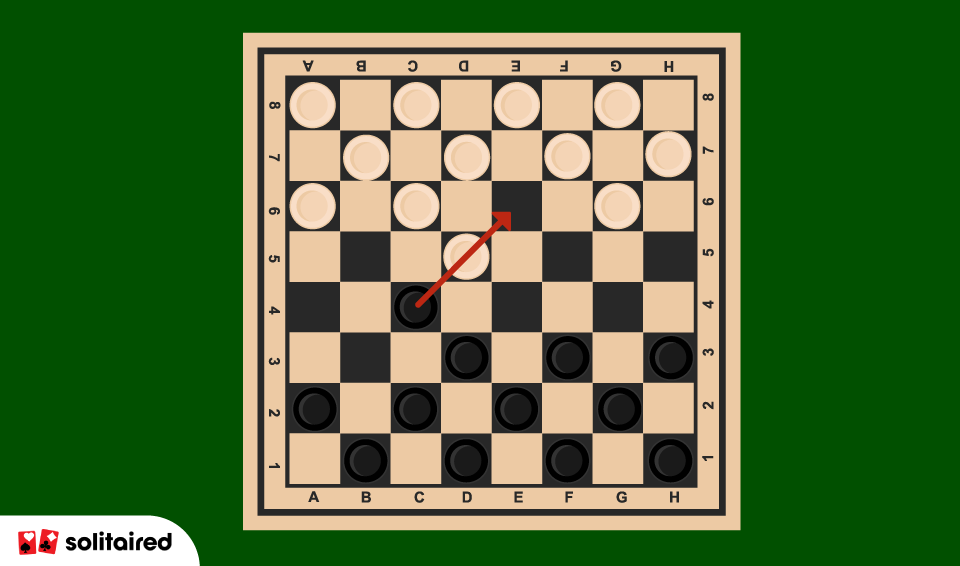 If the opportunity arises to capture more than one checker in a move, you must keep taking pieces until you cannot advance further. 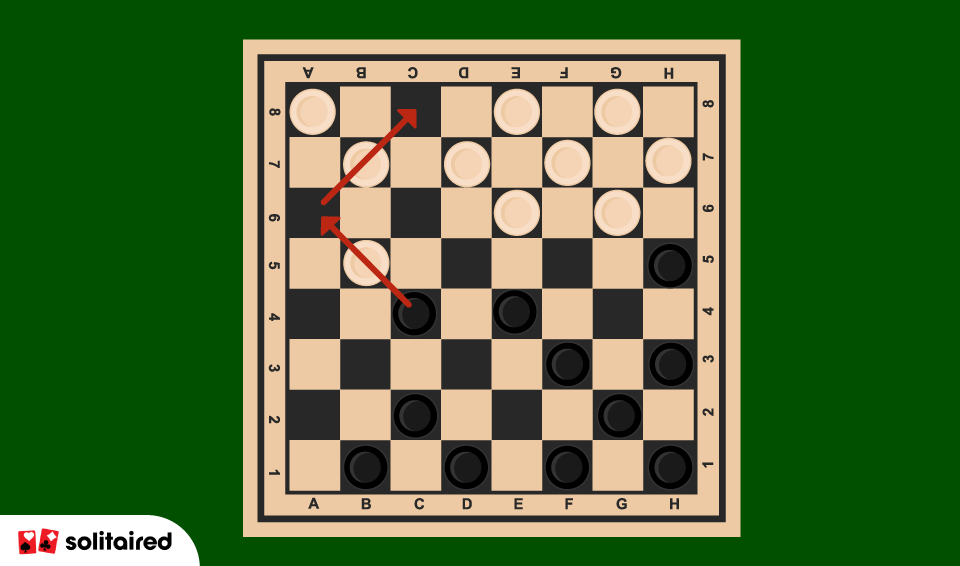 Importantly, if you move a checker to your opponent's back row – or they manage to traverse the board to yours – the checker is "crowned" and changes to a 'king’. Once a checker is crowned, it's granted the ability to move backward diagonally, making it a game-changing piece.

When a piece is crowned, there are certain things to bear in mind:

The game is won when one player has captured all their opponent's pieces or has blocked the remaining ones from making any additional moves.

Understanding the rules of Checkers inside out will only make you a better player. The more gaps in knowledge you have, the more difficult it is to spot game-winning plays.

These are some crucial rules to keep in mind when playing to help you improve your game.

Tips for Winning at Checkers

Understanding how to play is one thing, but knowing the tips, tricks, and strategies needed to play the game at an advanced level makes all the difference to your win percentage.

Some of the winning strategies used by the best players include:

Avoid defensive play – Checkers is an aggressive game, so holding back and keeping reserved doesn't bode well. Because capturing is mandatory, you'll be quickly punished for attempting to fortify a defense, so play with attack in mind.

Have control of the center – Newer players think it's best to hug the sides of the board as it only leaves one side of the board exposed. In reality, controlling the middle allows you to dictate play by opening up a barrage of attacking opportunities while also being in the best position to cover weaker flanks.

Advance all together – It's best to keep a balanced spread of movement across the board. Not only does this limit the number of kinks in your defense, but it lets you swarm the enemy en masse, leaving them with little choice but to play into your hands.

Don't forget to block – Preventing opponents from moving results in a stalemate for most games. In Checkers, if you've blocked a player from making any moves, you win – so consider it a viable strategy for success.

Below is a list of terms commonly used when playing Checkers. We've also included their definitions for ease of comprehension when learning the game.

Blockade – A formation of pieces that prevents the opponent from advancing.

Bridge – A formation where checkers are positioned, one in front of the other, and separated with a white square. A bridge is a weak position that allows an opponent to capture multiple checkers and gets them one step closer to crowning a piece and creating kings.

Capture – Knocking an opponent's piece out of the game by jumping over it.

Cook – A move made to force a difficult position.

Crowning – When a piece reaches the opposition back line, they are crowned to convert them into a king piece.

Double Hump – When a player captures two pieces in one move.

Draw - Situation where both players agree that neither has enough of an advantage nor time to win.

Jump – A two-square diagonal move over an enemy square occupied by the opponent's checker. The result is a capture of the enemy piece, and that checker is removed from play.

King - A piece that can move and capture backward and forward.

Pin – A situation where any move results in capture.

Pitch – An alternative word for a sacrifice.

Sacrifice – when a player exposes one of their own pieces in order to capture an opponent’s piece.

Shot - A forced combination of moves in which a player sacrifices one or more pieces to capture more of the opponent's checkers.

Trap – A set of moves that force the opponent into a pin.

Triple Jump – A move that results in the capture of three pieces.

Zugzwang – A rare situation where any move a player makes loses them the game.

What is the best opening move in checkers?

Can a checker jump a king?

According to international checkers rules, traditionally, a checker that hasn't been crowned cannot jump a king piece.

However, many variants allow un-crowned checkers to take jump kings.

An invulnerability to standard checkers and being able to traverse backward and forwards makes the king a formidable threat and often the key to winning the game.

Is checkers good for your brain?

Yes, regularly playing Checkers can is good for your brain. A game of Checkers stimulates the left and right hemispheres of the brain and tests logic and decision-making abilities.

Research suggests that a game of Checkers can reduce a person's chances of developing Alzheimer's disease by up to 75% – making it a fun way to keep your brain healthy and sharp.

Is checkers tougher than Chess?

Both games are uniquely challenging in their own way. Ultimately, it is down to the player which game they find more challenging.

Although Chess may seem more complicated with different variations of pieces and moves, Checkers poses additional challenges as one wrong move spells serious trouble that can't be recovered from as quickly as you could in a game of Chess.

Is there a way to play Checkers online?