How to play Sudoku

Sudoku is a logical brain-training puzzle game in which players complete a nine-by-nine grid by populating each square with a number. It requires patience and skill to work through the grid and identify which number fits each vacant square.

Despite its Japanese name, the game is believed to have been designed by an architect in the United States in the 1970s and was only introduced to Japan in the 1980s.

Sudoku has become a regular feature in the puzzle sections of newspapers and magazines worldwide and is also popular online, where players can enjoy new games daily or play through a bank of games.

The word ‘Sudoku’ is a contracted variation of the phrase ‘Suji wa dukoshin ni kagiru’, meaning ‘the digits must be single’.

How to play Sudoku

The grid begins with several squares pre-populated, with this exact number depending on the difficulty level being played.

Below is an example of a starting Sudoku grid: 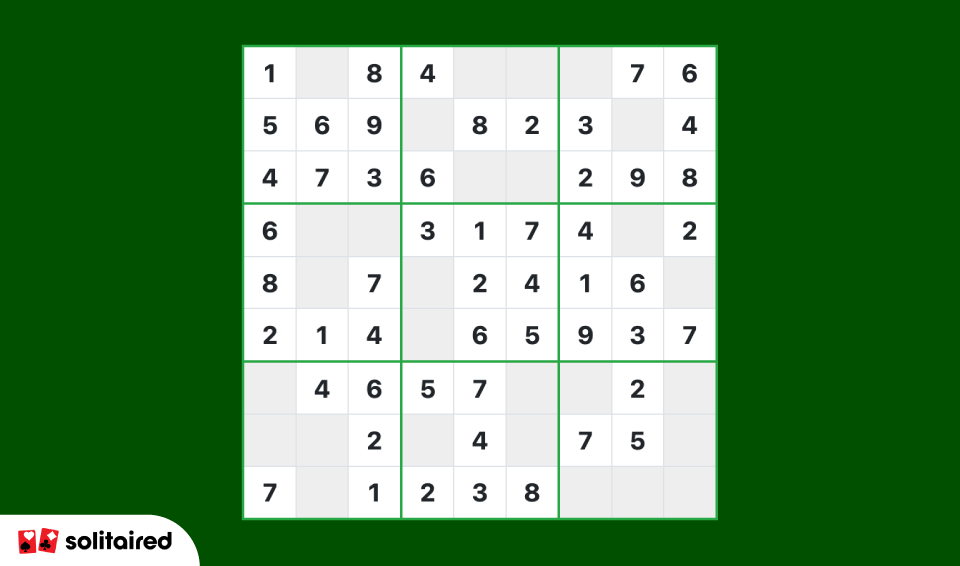 The aim of the game is to populate each horizontal line, vertical line, and sub-grid with the numbers one to nine, with no repeating numbers.

Sudoku can be played at various difficulty levels. Newspaper Sudoku variants are typically a medium difficulty, however, Solitaired’s online Sudoku lets you toggle difficulty between:

The difference between the difficulty levels typically comes down to the number of populated squares at the start of the game, as this determines how many squares the player needs to complete and how many number references they have access to from the start.

The most difficult games of Sudoku often have multiple numbers missing from the starting grid entirely. This means players have no reference for these numbers and must produce ‘candidates’ for them in each sub-grid and line.

Soduko beginners are advised to start on easy difficulty and work their way through the levels as their gameplay improves.

How to solve Sudoku

Depending on the difficulty of the game played, there are various ways to complete a Sudoku puzzle. These are Solitaired’s top tips on how to solve Sudoku:

While Sudoku can be challenging to complete, the rules are simple.

The aim of the game is to populate every square in the grid with a number between one and nine. However, the only rule is that each horizontal line, vertical line, and sub-grid must contain each number, one to nine, without any repeating numbers.

Players can tell if they have made a mistake as they will have two or more of the same number in a single line or sub-grid. One way to check that a line or grid has been completed correctly is the ’45 rule’, which states that adding the nine figures in a line or sub-grid together totals 45.

Taking a holistic view of the board, firstly look for any lines or grids with only a single empty square – these can be completed immediately as there are no other potential candidates for the square.

Next, scan the grid horizontally and vertically to identify any instances where there are two of the same number present within three lines. In these cases, the player can often identify where to place the third and final instance of this number and limit the options to just a few squares.

Below is an example of how this tactic can be effective: 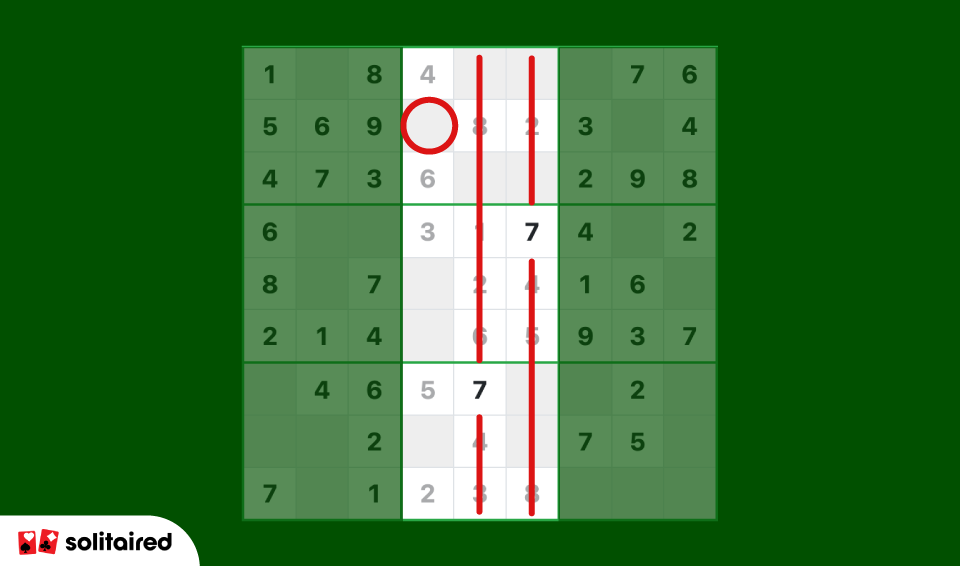 Once all obvious singles have been completed and you’re stuck for your next move, consider the candidates for the remaining spaces. This means working out which numbers could feasibly fit in different squares.

If you’re playing Sudoku in a newspaper or magazine, it can be helpful to pencil in potential candidates in the top corner of each square. These can then be erased when the confirmed number is discovered.

It can be tricky to remember the potential candidates for each square when playing online but making notes on paper can be helpful.

Noting down your candidates may reveal a ‘naked single’ pair – two cells that have the same candidate, for example, two squares that could both potentially be an eight, within the same sub-grid.

Naked singles can be helpful as you can compare them against other adjacent grids. This way, you may reveal a hidden single – the only square this number can be played in the other grid.

After playing all naked singles available in the grid, move on to naked pairs, then triples and quadruples. These are also helpful in eliminating candidates.

Players can also look out for certain visual number patterns within the grid that can make it easier to work out surrounding candidates or numbers. 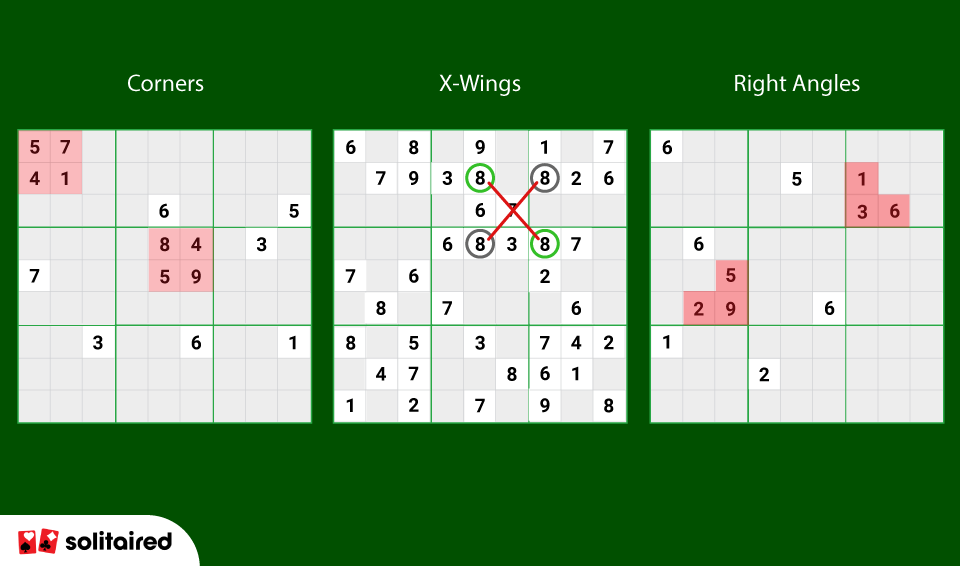 Another common technique used by experienced Sudoku players is the ‘uniqueness test’ – where candidates in a grid or row are compared to expose unique numbers.

There are various uniqueness tests possible in Soduko. However, one example is comparing the potential candidates in a single sub-grid.

If every square has just one potential candidate, except one square that has multiple candidates, every candidate in this square can be eliminated except for the unique number among the candidates.

There are plenty of brain-training games that are similar to Sudoku in their demand for patience and strategy skills. Some games like Sudoku include:

There are also many variations on the Sudoku format, including:

At Solitaired, we offer over 500 games free to play, including a range of strategy and number games like web Sudoku.

What is the easiest way to solve a hard Sudoku?

The simplest way to solve Sudoku is to identify any obvious singles – where there is only one vacant square in a line or sub-grid – then note down the potential candidate numbers for each remaining square and identify where these candidates can be eliminated to reveal the right number.

Solitaired offers a difficulty toggle, which players can adjust to enjoy games at a variety of difficulties from easy to inhuman. Beginners are advised to start on the easy level and progress through difficulties as their ability develops.

What is the 45 rule in Sudoku?

The 45 rule in Sudoku states that, if a line or grid has been completed correctly, its nine figures should add together to give 45.

This is because each line and grid should contain the numbers one to nine with no overlapping numbers. One way to check that this has been achieved is to add the numbers together with the aim of recreating the following formula:

Is Sudoku good for your brain?

Yes, regularly practicing Sudoku puzzles is a good way to exercise your memory and strategic thinking. This is because the game requires players to memorize the current grid while looking for new opportunities and thinking multiple steps ahead.

A recent study tested the attention, memory, and reasoning skills in over-50s and found that these skills were stronger in the group that regularly practiced puzzle games like Sudoku compared with the group that did not.

Is there a formula for Sudoku?

There is believed to be a theory that guarantees a win in every game of Sudoku, developed by computer scientist James Crook in 2009.

However, the formula involves writing out the potential candidates for every single box and working through all potential options to find the winning puzzle – and it’s believed that this takes longer to carry out than simply solving a Sudoku puzzle using traditional logic skills.