How To Play Pyramid Solitaire

What is Pyramid Solitaire?

Pyramid Solitaire is a variant of traditional Klondike Solitaire. The aim of the game is still to move the cards into the foundation pile, but the goal and the layout make it a completely different game.

The objective is to remove pairs of exposed cards that add up to thirteen and clear the entire pyramid – as opposed to traditional Klondike Solitaire, where you juggle cards between multiple columns.

How to set up a game of Pyramid Solitaire

Pyramid Solitaire is simple to play and equally easy to set up.

Firstly, shuffle a deck of cards and place it face down. From the pile, turn up the first face-down card and put it on the table.

Repeat this pattern until you reach a row of seven cards at the base – this means you've completed the pyramid. The remaining cards will form the stockpile that players use if they run out of available plays on the pyramid.

For reference, a finished pyramid should look like this: 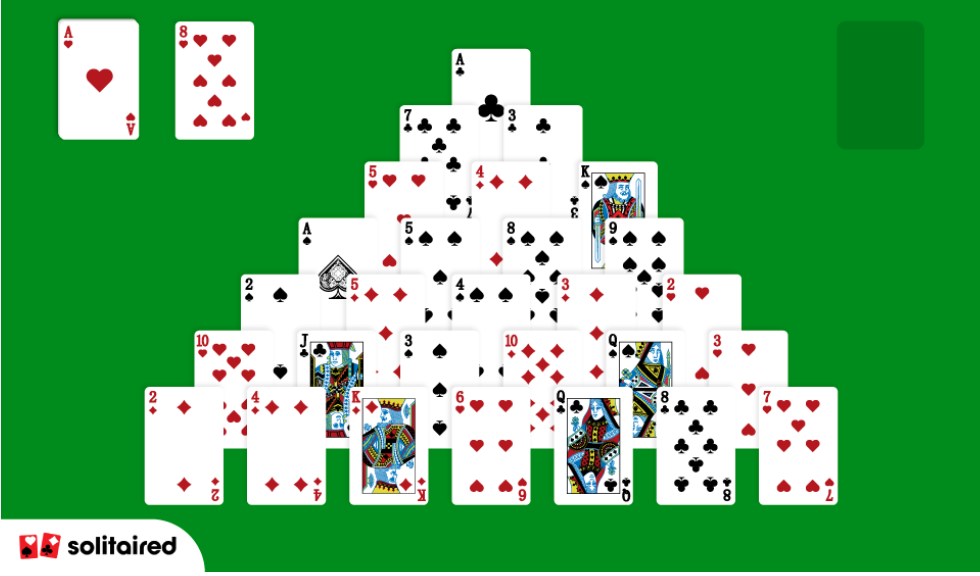 Better yet, why not try our free online pyramid solitaire game with standard face cards and card backs.

How to play Pyramid Solitaire

Pyramid Solitaire is one of the least challenging variants to learn. With quick hands and a fast-paced tempo, it's perfect for when you've got a few minutes to kill.

However, it's crucial to understand how to navigate the pyramid to better your game and win more matches.

Like other variants of Solitaire, Pyramid Solitaire has its own unique spin on the rules.

When it comes to the gameplay itself, players should be aware that:

Because of the low chance of winning at Pyramid Solitaire, other variants can provide players with a more enjoyable experience, for example:

Firstly, examine the bottom row of the pyramid. Out of the available cards on the row, see if a combination adds up to 13. If so, take them both and place them into the foundation pile to eliminate them from play.

If you can't move, turn up a card from the face-down stockpile and see if its value can be added to any exposed cards to make thirteen. If you can't, place it to the side to form a waste pile and pick up another card from the stock pile until you can make a match with any exposed cards in the pyramid. Cards are only considered exposed when no other cards overlap them.

The game ends when one of two end conditions is met. Players win the game when all the cards in the pyramid, waste, and stockpiles are moved to the foundation pile. The game is also over when you have cycled through the stock and waste piles three times.

How to win Pyramid Solitaire

Because of how challenging it can be to win a game of Pyramid Solitaire, it's even more important to know tips and tricks of the trade to give yourself the greatest possible chance of winning.

Following these simple pointers, you can transform your game.

Waiting until later into the game gives you the best chance to clear as much of the pyramid as possible before matching cards from the piles.

Blocked - When you can't make or find any more moves to progress the game. Being blocked is a pivotal point whereby you can win or lose.

Blocker – A blocker is a card that is causing an obstruction. This is because you might not have seen a way out, or reserve cards need to be cycled to remove that card from play or win the game.

Deck (stockpile) - A conventional pack of 52 playing cards. Within Pyramid Solitaire, the word deck also refers to a pile or hand which you can also deal into the game.

Exposed cards - The cards in the pyramid that aren't overlapped by any other card on the layout and are available to pair.

Foundation pile - This is a pile or area on the layout. In this case, the aim is to stack all the cards from the pyramid, deck, and waste pile onto the foundation pile.

Pyramid – The pyramid is the starting layout of the first 28 cards on the tableau – with each row containing an additional card to form a pyramid shape.

Rank - The value of the card. Card ranks change depending on the game type. For example, in Pyramid Solitaire, aces are valued at one, while the jack, queen, and king cards are respectively valued at 11, 12, and 13. Every other number card holds the value stated on the card.

Tableau – Refers to the main playing area and is the part of the layout where all action happens. In  Pyramid Solitaire, this is where the pyramid itself sits.

Waste pile – An additional pile for unused deck cards. Cards from the stockpile that cannot be immediately used are cycled into a waste pile to reveal new cards in the deck.

How many cards do you use in Pyramid Solitaire?

A traditional game of Pyramid Solitaire uses 28 cards. There are 7 rows of cards – the base having 7 cards. As you go up the pyramid, each row has one less card until you get to one card at the pyramid's peak.

Why do you add to 13 in Pyramid Solitaire?

When using a standard 52-card deck, each suit has 13 cards – meaning attributing a value to the jack, queen, and king cards is what makes the game possible.

What are the odds of winning Pyramid Solitaire?

Surprisingly, one of the simpler Solitaire variants has one of the lowest chances of winning.

It's estimated that the win rate of a traditional game of 28-card Pyramid Solitaire is anywhere from 0.5% to 5.5% - making it extremely difficult for the player to come out on top.

What are the values of the cards in Pyramid Solitaire?

How many times can you go through the deck in Pyramid Solitaire?

You can cycle between the waste pile and the deck three times each – if you cycle through any more than three times, the game is lost because you can't make any more moves.

If you like Pyramid Solitaire, be sure to try:

If you’re looking for other classic games, you can always play:

View our full range of over 500 free online games – including Pyramid Solitaire – all of which are completely free to play, now.