How To Play Yahtzee

Yahtzee is a strategy game played with five standard dice. It is believed the game was invented by a Canadian couple – originally known as the ‘Yacht Game’ – and played with friends before becoming a worldwide hit.

A game consists of 13 ‘turns’, in which players roll all five dice and choose from one of the possible scoring options. The aim is to choose the highest or most strategic scoring option for each turn to achieve the highest total score at the end of the game.

Players must choose one of 13 options each turn – with a potential minimum score of zero and maximum score of 50 points depending on the dice rolled and the option chosen. There are also bonus points available.

The name ‘Yahtzee’ is also given to the highest-scoring roll possible in the game – five of a kind.

How to play Yahtzee

Yahtzee can be played with physical dice or online, and as either a multi- or single-player game online. The rules of the game are the same in all formats.

The only equipment required to play Yahtzee is five standard dice and a scorecard featuring all 13 scoring options and space to record scores and potential bonus points.

The player then chooses one of the 13 scoring options from their scorecard based on the dice at their disposal. Each scoring option can only be used once – with all options eventually covered across the player’s 13 turns.

Once the player has chosen the best scoring option available for their dice, the appropriate points total is recorded on the scorecard. For example, if the player rolled ‘two, two, two, four, six’ and chose the ‘twos’ option, they would record six points in this box.

Player two then follows the same process, with players taking ‘turns’ until they have played 13 each.

Once all players have taken 13 turns and recorded their scores, each player’s total is tallied up – including any relevant bonus points awarded – and the winner is the player with the highest total.

The rules of Yahtzee are simple and there are only a few key points to remember:

How to score a game of Yahtzee

Below is a list of all the possible scoring turns in a game of Yahtzee:

The scoring system in Yahtzee is split into ‘upper’ and ‘lower’ sections. A Yahtzee scorecard looks like the below: 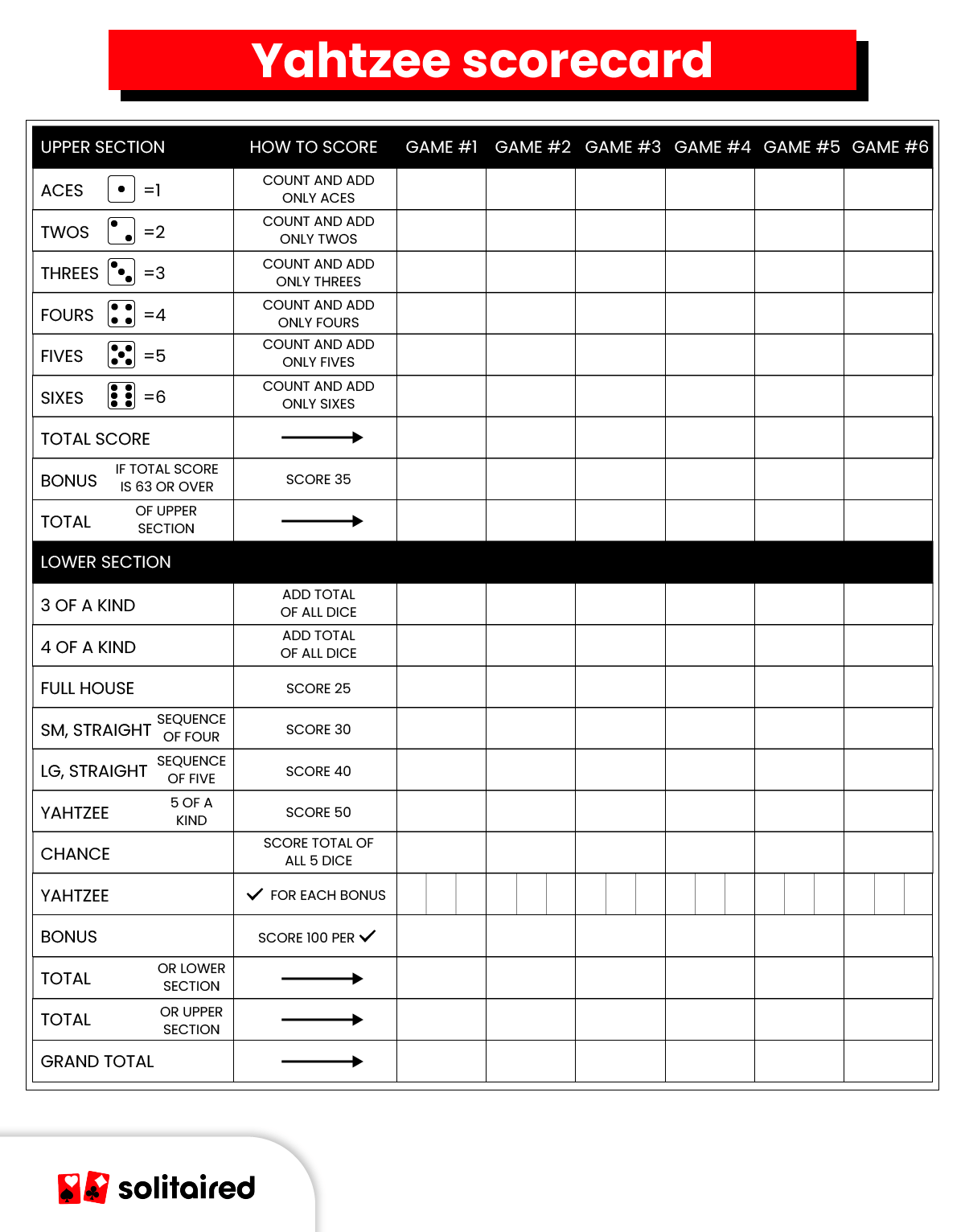 A player is awarded 35 bonus points if their total ‘upper’ score reaches at least 63.

An additional 100 points are available to players who score more than one Yahtzee in a single game.

How to win at Yahtzee

Yahtzee is a game of both strategy and luck. Players can use their scoring options wisely to maximize their total score – however, it also comes down to the luck of the dice as to whether each move pays off.

There are ways to increase a player’s chances of achieving a higher total score, though, including:

While there is no way to guarantee winning every game, one way to improve your Yahtzee gameplay is to practice. Play Yahtzee now on Solitaired.com.

What are the probabilities in Yahtzee?

The chances of rolling each type of scoring option in Yahtzee are different – and this is reflected in their respective values. The statistical probability of scoring each option is as follows:

However, these are the probabilities based on a single roll of the dice – so, players can increase their likelihood of achieving each option by strategically holding and re-rolling some or all their dice.

There are many games similar to Yahtzee that require strategic thinking. Games like Yahtzee include:

At Solitaired, we provide over 500 free games free to play online, including Yahtzee, Solitaire and many alternative games.

Can you play Yahtzee with two players?

Yes, Yahtzee can be played with two or more players. When playing with physical dice, there is no limit to the number of players – however, this may be restricted by the number of scorecards available. When playing online Yahtzee, it is possible to play single or multiplayer games.

How many dice do you use in Yahtzee?

A traditional game of Yahtzee is played with five standard six-sided dice. Only a single set of five dice is needed as players take turns to roll. However, there are variations of Yahtzee that use a different number of dice, for example, variations that use a greater number of dice and require players to roll simultaneously or use different sets of colored dice, like ‘Yahtzee Texas Hold ’em’.

What is the objective of Yahtzee?

The objective of Yahtzee is to strategically choose the highest value score possible in each of 13 turns, to earn the highest possible total score.

This can be achieved by both ‘holding’ and re-rolling dice tactically to achieve specific scores, as well as considering which scoring option to choose each turn to maximize your total. For example, if a player rolls three fives and two ones, they could score 25 points by choosing the ‘full house’ category, while they would only score 15 points by choosing the ‘fives’ category – however, their roll is technically eligible for both.

Is Yatzy the same as Yahtzee?

While Yatzy is very similar to Yahtzee, they are different games. Both games involve rolling five standard dice and recording scores for 13 different categories, however, there are differences in the way the categories are scored and how bonus points are awarded. For example, Yahtzee includes a 100-point bonus if a player rolls five of a kind twice in the same game.

View our full range of over 500 online games – including Yahtzee – all of which are completely free to play, now.